The following article originally appeared in The Monarch: Canada's Transgender Reader Winter 1997 Issue # 44. The Monarch is the quarterly publication for the southern-Ontario transgender group, Xpressions. 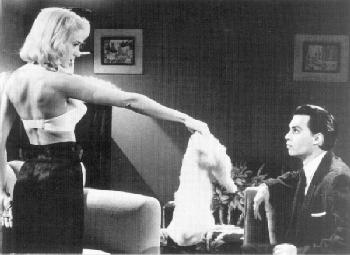 I'm not quite sure if I'm happy about this or not, but it seems that us transgendered folk are... well... trendy. No, really! I mean, ever since Jaye Davidson and The Crying Game, all of a sudden there's this sudden boom of material about, by, and for transpeople. There's movies: Wigstock, Priscilla: Queen of the Desert, and Ed Wood. There's photo books by Loren Cameron, Mary Ann Camilleri, and Rosamond Norbury. And thanks to transfolk like Kate Bornstein and Leslie Feinberg, we're even starting to write our own ideas about what it means to be transgendered; like so many liberation groups before us, we are "claiming our own voice". We're even getting political. Crowds of TGs in black "Transsexual Menace" T-shirts are organizing protests, demanding our rights in society. Let's face it: TGs are the latest emerging social movement. People want to know about us as we're trying to find our place in society.

Last winter, I took a course on postmodernism and contemporary film theory. In the course, we discussed a number of social movements, from black liberation to feminism to Queer Nation. Something I noticed about each of these movements is that each one of them went through a type of schism, where the ranks were divided. Certain factions within the social groups would recognize significant differences between themselves and the rest of the movement. Mainstream feminism, for example, came to be seen as a predominantly white, middle-class endeavor. As a result, women of colour and working-class women each went off and started their own smaller groups. Similarly, differences were perceived between blacks of Caribbean heritage and the rest of the black liberation movement. Gay men and lesbians often fought the same battles as two separate groups.

In some cases, the segmented groups worked against one another. At the very least, the advantages of size were lost, and the social movements suffered as a result. Unfortunately, TGs have always been prepared to break up into smaller camps. Just look at the labels that we have: crossdressers, transsexuals, drag kings, non-ops, MTFs, FTMs, androgynes, fetishists, butches, sissie boys, passing, flamboyant... The list goes on. Many TGs spend a considerable amount of time trying to neatly define and label the various types of TGs; J.J. Allen, in her book, The Man In The Red Velvet Dress, defines eleven different type of transpeople without even touching on the MTF/FTM distinction.

In a sense, this is good, because we recognize and appreciate the diversity of attitudes in the TG community. But I've also noticed a strong tendency to be exclusionary. For example: on internet forums such as alt.transgendered, there are frequent debates about whether or not TGs who are "just" crossdressers can really understand "real" transsexuals. Similarly, the Transgender Canada mailing list (TGC-L) recently discussed the absence of FTMs in the major TG social events, such as Fantasia Fair. Organizations such as the Society For the Second Self (Tri-Ess) limit their full membership status to heterosexual cross-dressers. Even here, in Ontario, the Canadian Crossdressers Club (CCDC), supposedly an "open" organization, once had a policy that excluded "bearded ladies."

It was with great interest, therefore, that I read about Dallas Denny's challenge to Tri-Ess. Dallas, (popularly believed to be) a post-operative transsexual, has applied for full membership to the Atlanta-based chapter of the CD group, Sigma Epsilon. According to an electronic news release from AEGIS, "Denny [...] was also concerned by the number of Sigma Epsilon members who approached her privately to talk about their issues with homosexuality and transsexualism. 'Cumulatively, over five years, it was more than half of the organization,' she said. 'We re talking 30 or 40 people. Eventually, I said Wait a minute. Something is not adding up here.'"1

Tri-Ess' policy has been attacked many times before regarding its exclusionary policies, and the group has always defended itself by saying that the needs of heterosexual crossdressers are sufficiently different from other TGs to warrant a special organization. After all, the argument goes, a single club cannot be all things to all people. Virginia Prince, who founded the group that would later become Tri-Ess, feels (according to J.J. Allen) that "the wives of CDs might misconstrue what their husbands really wanted if there were gay drag queens and bisexual CDs soliciting other men at the meetings."2

Dallas argues that focused groups are a better alternative to closed groups: "Focused groups, unlike closed groups, have a mission, to serve a particular subset of people, but do not close their ranks against others, so long as they support the focus.

Dallas doesn't rule out the occasional need for closed groups. In fact, Virginia Prince's concern about the reactions of wives and partners of CDs might be a rational basis for making the group closed. But as Dallas points out, the criteria for determining what makes a heterosexual CD is extremely fuzzy. If a crossdresser's wife or partner is going to get "the wrong impression" from seeing transsexual members in Tri-Ess, what impression will they get from TGs who live full-time as women? Or TGs on hormones? Dallas says, "When a group -- and especially a group in our community -- is closed, I think it's important that it be very careful in being fair in enforcing its policies. When the policy is enforced differentially, then it is very unfair on those who are excluded."4 This is an on-going problem in the TG community: our labels are fuzzy, and yet those labels are constantly at the heart of most of our internal squables.

If transpeople are currently trendy, I can't help but wonder if it's because now we have a nifty, new, all-encompasing label: transgender. According to most writers about the TG movement, "transgendered" includes everyone who is differently gendered -- the full spectrum from crossdressers to transsexuals. For the first time, we have a label that inclusive, rather than divisive. I mean, we still regularly fight over what the shape of TG politics and theory should be, but at least we have one big umbrella term that all of us can stand under ... and, my, aren't there a lot of us!

Back to my transgender page.